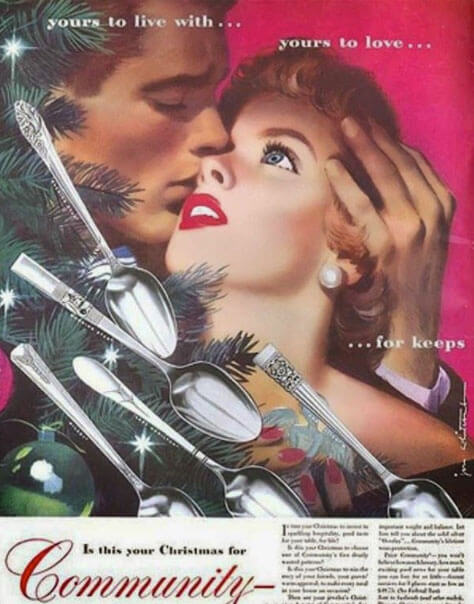 I know many companies need to make a good chunk of their profits during the holiday season, but these vintage holiday ads were a bit…misguided. 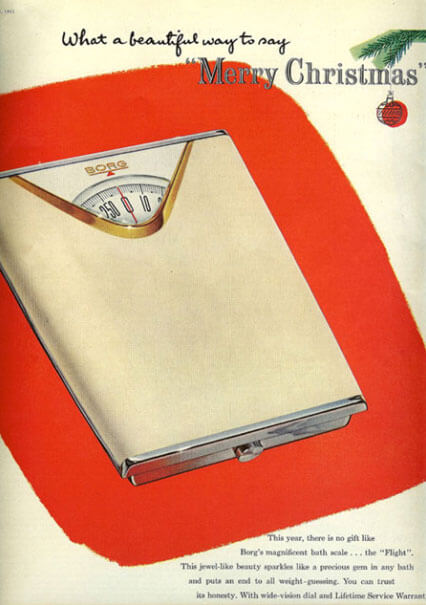 Sure, it’s a pretty scale, but the subtext of a scale under the tree is, “Yes, I said I loved you unconditionally, but that was 15 pounds ago, so you’re technically a different person than the one I signed the whole ‘unconditional love’ contract with. Merry Christmas?”

Don’t give anyone a scale for Christmas. Ever. Period. 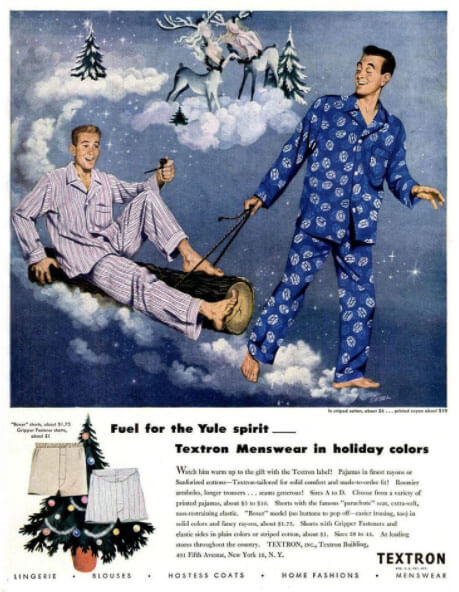 It’s great that the company was forward-thinking enough to feature a gay couple in their ad, but in what universe does one barefoot man pull another barefoot man on a log with a rope in the snow-clouds? And were log-sleds ever a thing? Of course not. Logs aren’t aerodynamic. And who brings their pipe with them to sled in the sky? Also, someone needs to cover up the Reinmaids in the background. If you’re going to create a mythical snow creature, at the very least give them a nice puffy jacket or some fur. 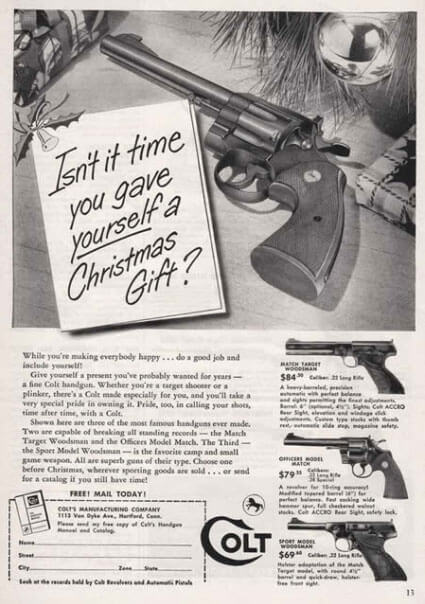 Colt. Because nothing says “Merry Christmas, me!” like a handgun.

WHAT IS GOING ON?

Is she blind? Does she know he just decorated her tree with spoons? Why do spoons turn him on so much? And why is he kissing her right nostril? I have a lot of questions for the Community Silverplate Company. 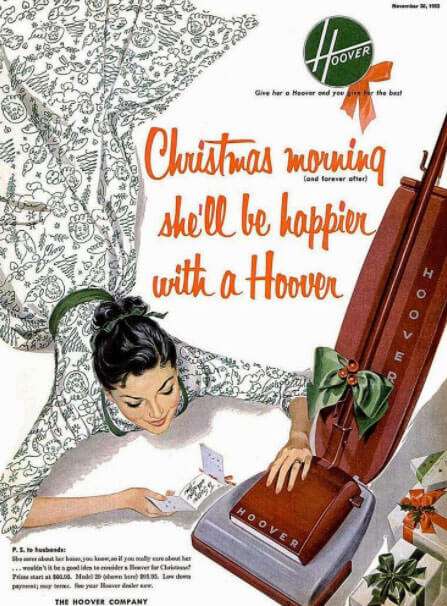 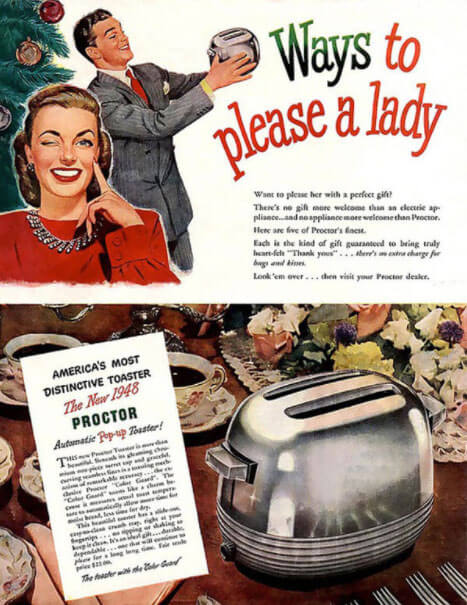 Ways to please a lady:
1. Don’t give her a scale, a vacuum or a toaster for Christmas.
2. That’s pretty much it. 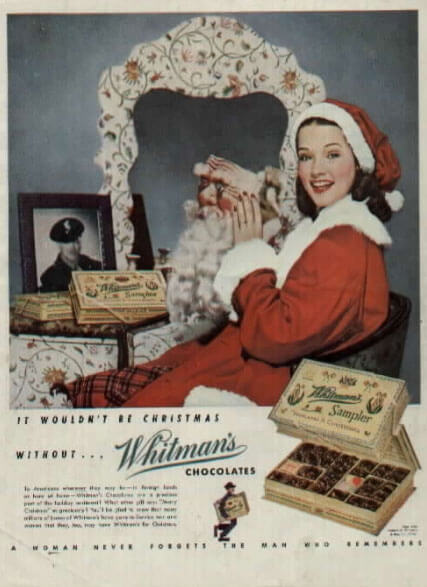 “Hey, let’s have a woman in the ad holding Santa’s face, which she appears to have ripped off his body, Buffalo-Bill style. It’ll be an attention-grabber!” 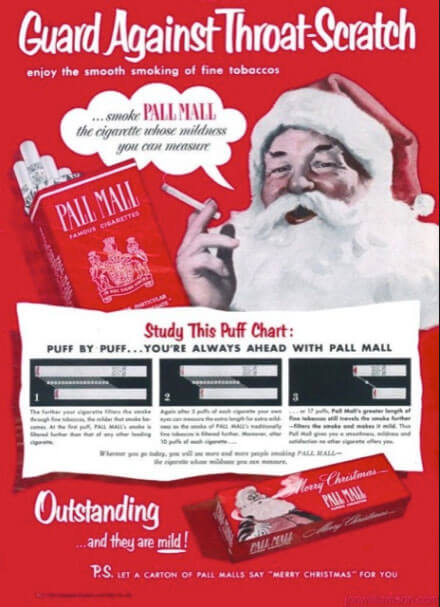 “Hey, kids! Life can get hard at the North Pole. The daily grind of toy production and the yearly pressure of pausing the space/time continuum to deliver toys to every child in the world can take its toll on Santa. So he smokes to relax. You should try it!” 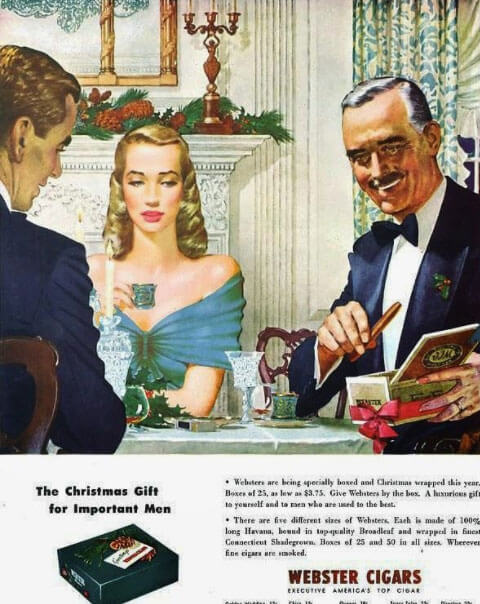 “…and when important men pull out their Webster Cigars, women everywhere will be…well, from the looks of it, they’ll be bored. Just unbelievably bored and wistful, thinking of all the unimportant-yet-fascinating men and women they dated in college when they still had hope. Webster Cigars: they’ll make them pretend to like you!” 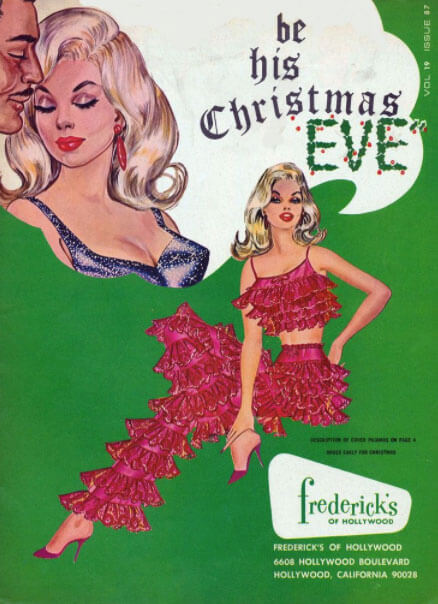 I’m all for holiday jollity and I may get some pushback on this one, but I strongly believe that women shouldn’t dress as trees. Don’t @ me.

Here’s wishing you a happy, healthy and vacuum-free holiday from all of us at Fish Marketing!